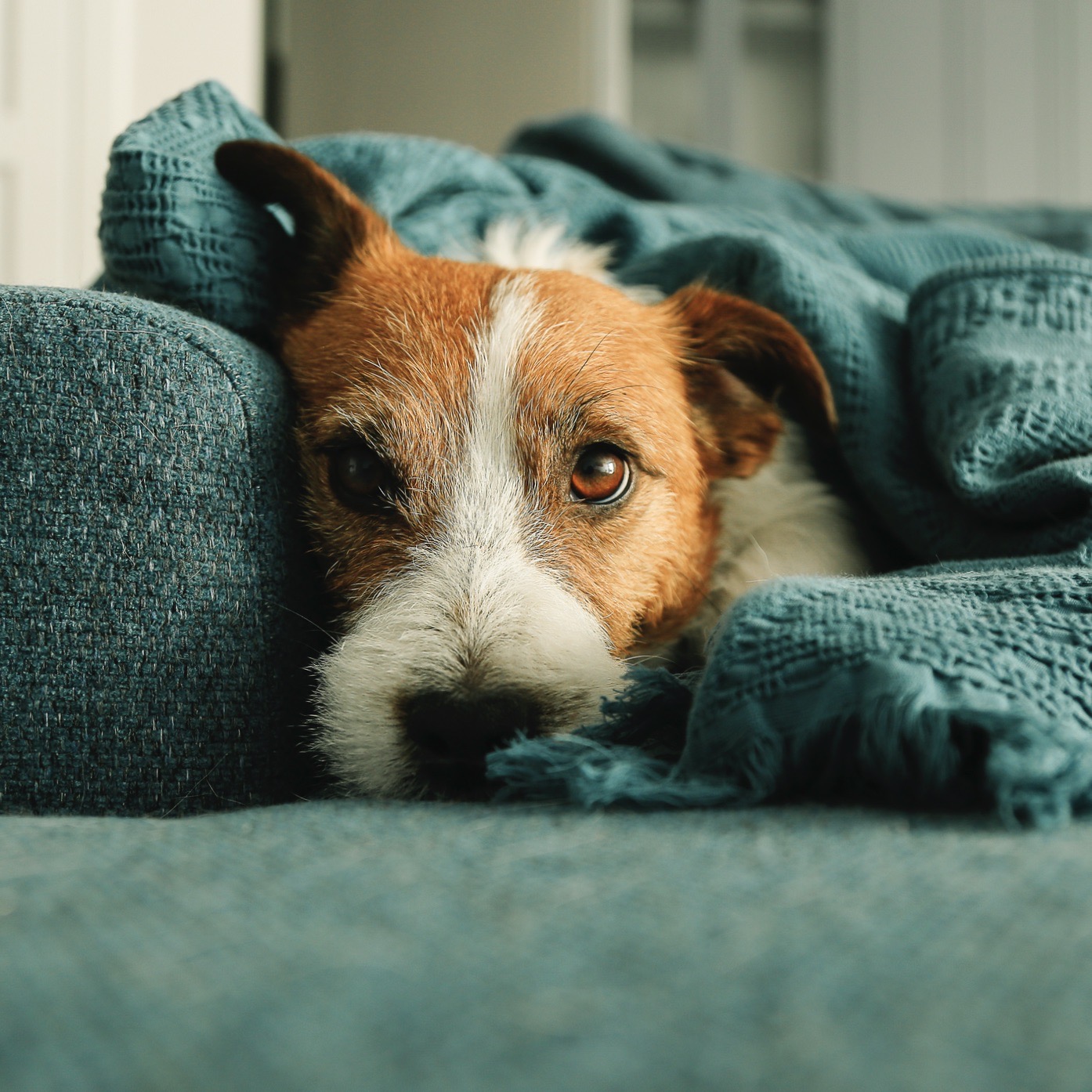 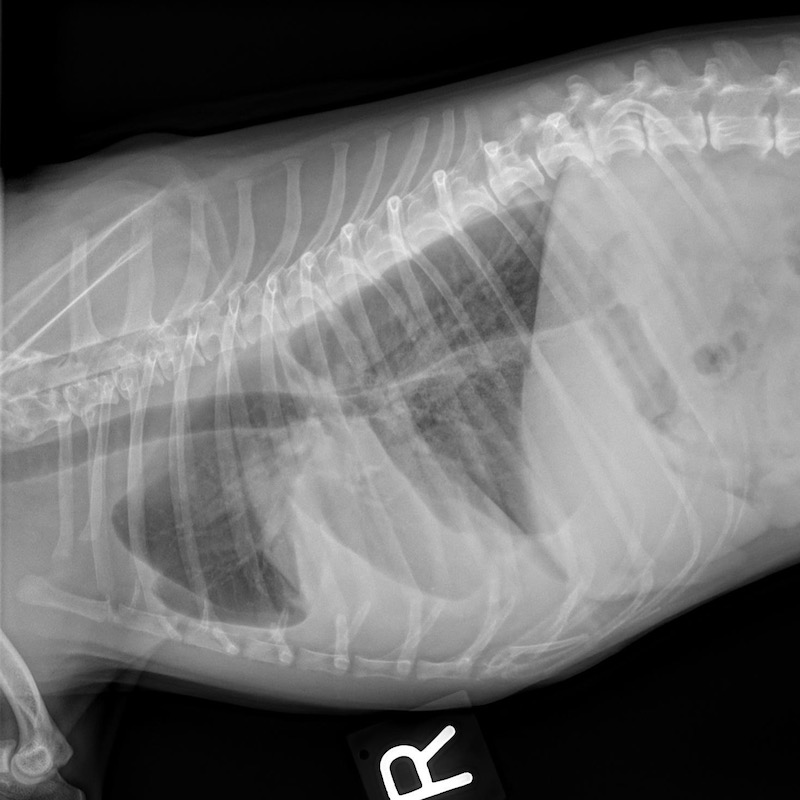 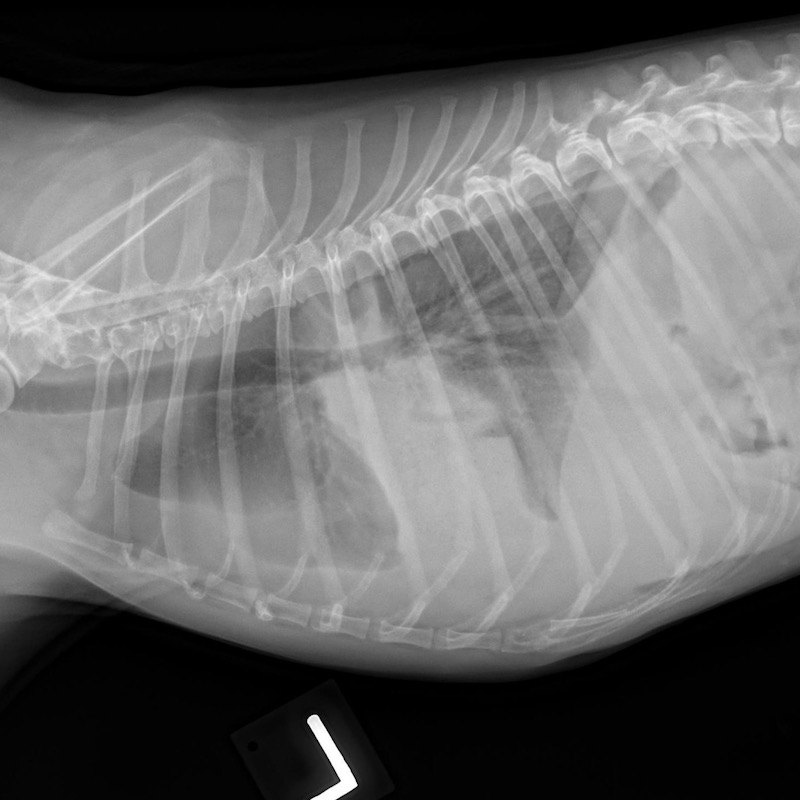 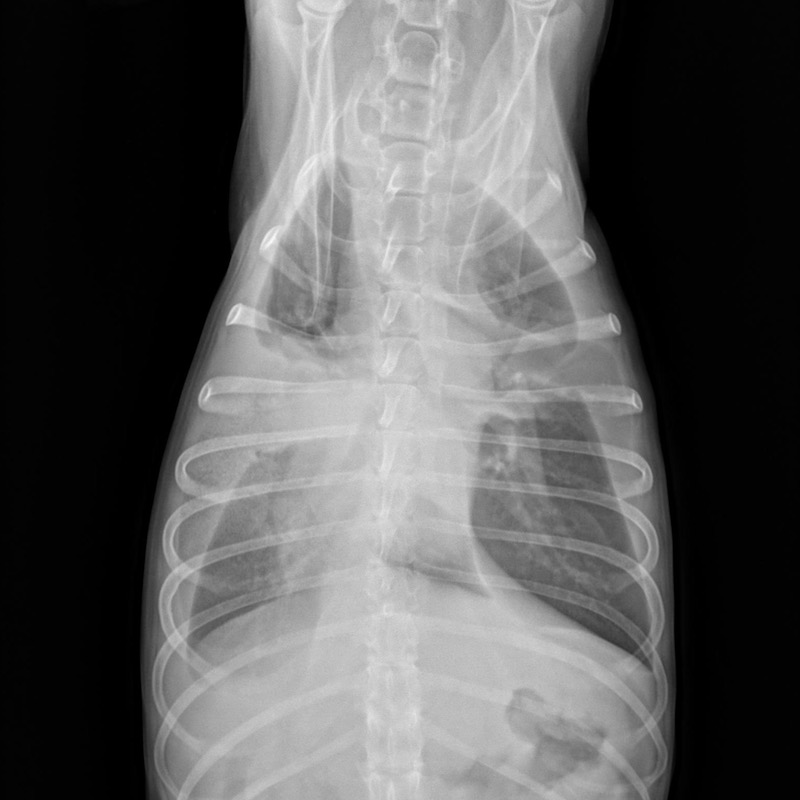 1 week history of hacking cough. Had initially been treated with a cough suppressant which resulted in no improvement. Presented several days later in acute respiratory distress. Still coughing and had one episode of hemoptysis the morning prior to presentation.

BAR, distressed. Pale pink mucus membranes with prolonged CRT. Tachypneic with an inspiratory dyspnea. No murmur or arrhythmia ausculted, though auscultation limited by muffling of the heart and lung sounds ventrally over both hemithoraces. Femoral pulses weak but synchronous.

Case outcome: Therapeutic thoracocentesis was performed prior to transfer to a critical care hospital, where further stabilization followed by a thoracotomy and right middle lung lobectomy were performed. A chest tube was left in place for about 48 hours post-op, and removed when no fluid or air had been evacuated for 24 hours. Culture and histopathology of the affected lung lobe did not reveal a specific underlying cause for the torsion, yielding an anticipated good prognosis post-op.

Discussion: Lung lobe torsion is rare in dogs overall, with Pugs and deep chested dogs such as Afghan hounds over-represented. When occurring in large breed dogs, the right middle lung lobe is most commonly affected, while the left cranial lobe is most often affected in small, toy and chondrodystrophic dogs. (It seems fitting considering the personality of most Jack Russell Terriers that the dog in this case report didn’t seem to know that she was a small breed dog!)

Torsions can occur spontaneously following a partial spontaneous lung lobe collapse, allowing the lobe to rotate on its axis around the bronchovesicular pedicle which constricts the bronchus and vasculature at the hilus. Torsion can also occur secondary to conditions that increase the mobility of a particular lung lobe, such as trauma, diaphragmatic hernia, pneumothorax, neoplasia, thoracotomy and chronic lower respiratory disease. Regardless of cause, pleural effusion develops due to congestion of the pulmonary vasculature and consolidation of the affected lobe.

Dogs with lung lobe torsion present dyspneic, possibly with a history of cough leading up to the onset of respiratory distress. Other more variable clinical signs can include cyanosis or pallor, collapse, hemoptysis, weakness, fever, vomiting, anorexia.

When occurring secondary to other pathology (neoplasia, pneumonia, trauma) prognosis is poor. However, the prognosis for a spontaneous torsion treated with lung lobectomy is good. Possible post-op complications include torsion of another lobe, pneumonia, pneumothorax, ARDS. Pugs with spontaneous torsions have been reported to do better post-operatively than other dog breeds.

When classic findings are seen on radiographs as with the dog in this report (vesicular gas pattern, pleural effusion, enlargement of the affected lobe with air bronchograms) thoracic radiography is generally sufficient for diagnosis. When radiography is not diagnostic, CT is helpful for diagnosis prior to surgery, where definitive confirmation is made.