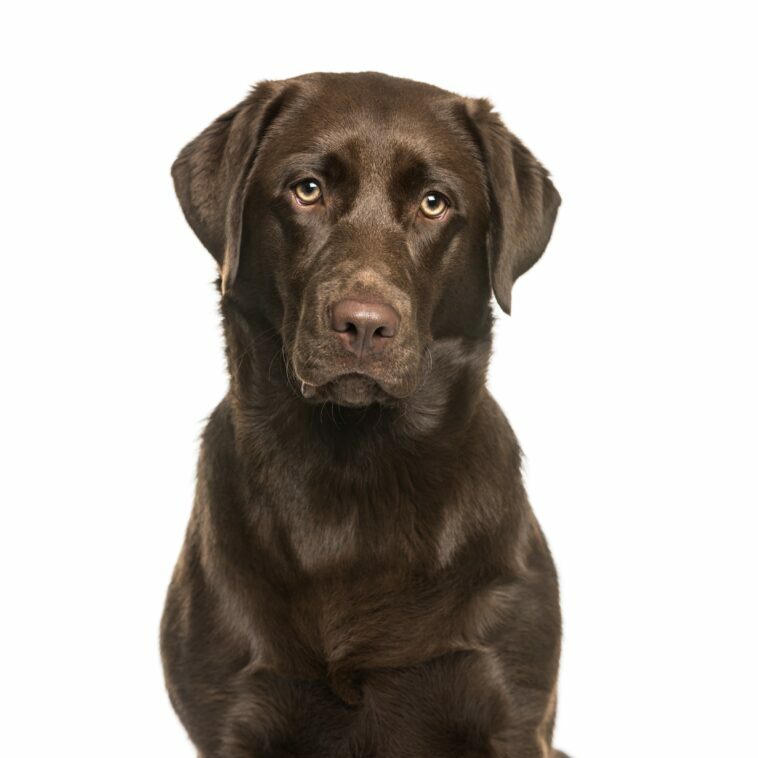 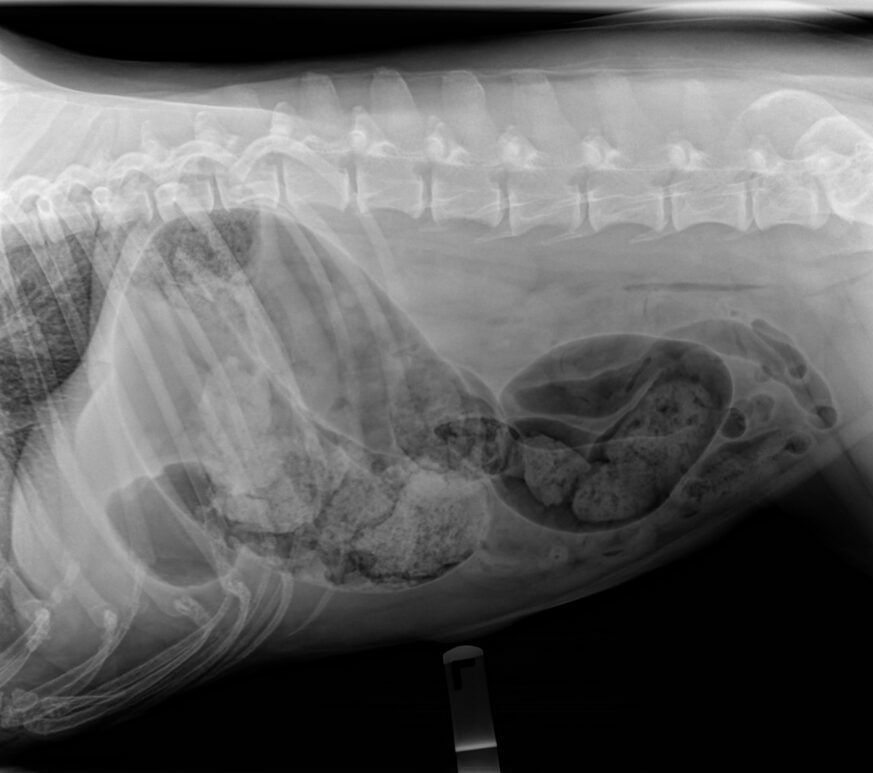 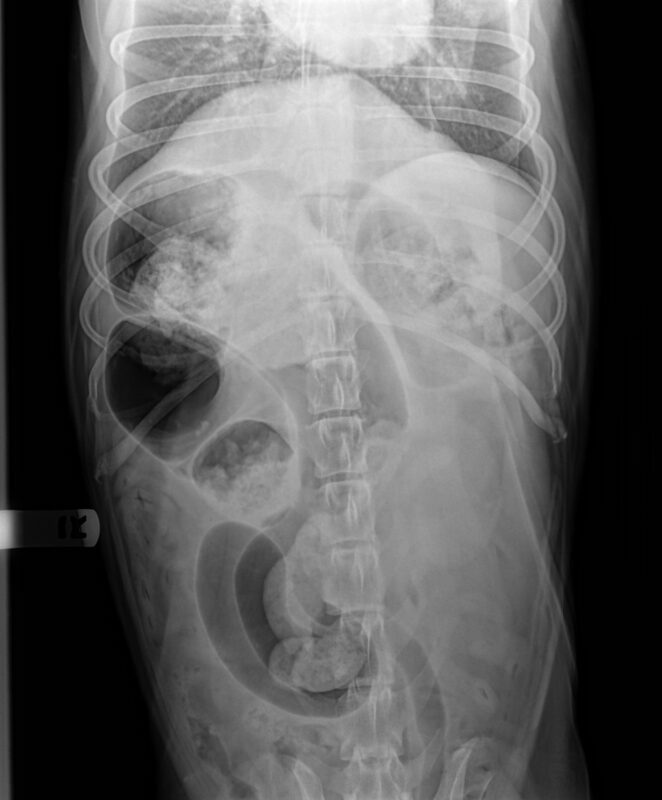 One day prior to presentation, the patient had been seen for a wellness examination. She was vaccinated and sent home with a preventative dose of fenbendazole, which was administered that same evening. She vomited two times overnight, seemed restless and continued to vomit the following day.

On physical examination, she was tachypneic and tense on abdominal palpation. Decreased GI tract sounds were also noted.

Lateral and VD abdominal radiographs were obtained. Radiographs showed marked gas distension of the transverse colon, along with portions of the ascending and descending colon. The distal portion of the descending colon contained a very small amount of intraluminal gas.

Case Outcome: The patient was referred for emergency surgery.  At the time of surgery, the colon was not actively torsed, but a dilated colon with mesocolonic bruising consistent with prior torsion was noted.  A colopexy was performed at the transverse to descending colon region.  The patient recovered uneventfully from anesthesia and is currently doing well at home.

Discussion: Colonic torsion is a relatively uncommon condition that has not been well described.  Several studies suggest that the condition is over-represented in large breed male dogs with prior history of gastrointestinal disease or surgery, in particular, gastropexy.  The most common presenting clinical sign is vomiting, but variable and vague signs have also been reported.

The normal diameter of the canine colon should be less than the length of L7.  Segmental dilation of the colon coupled with abnormal positioning of the bowel in the cranial portion of the abdomen should increase suspicion for colonic torsion.  In the presence of severe gas distention, it can be difficult to differentiate small and large intestine.  In these cases, a barium enema can be performed for confirmation of the diagnosis.

Due to a large amount of gas in the bowel, ultrasound is not a useful tool for obtaining a diagnosis.  However, ultrasound can be used to evaluate the abdomen for free fluid or gas consistent with a septic abdomen. 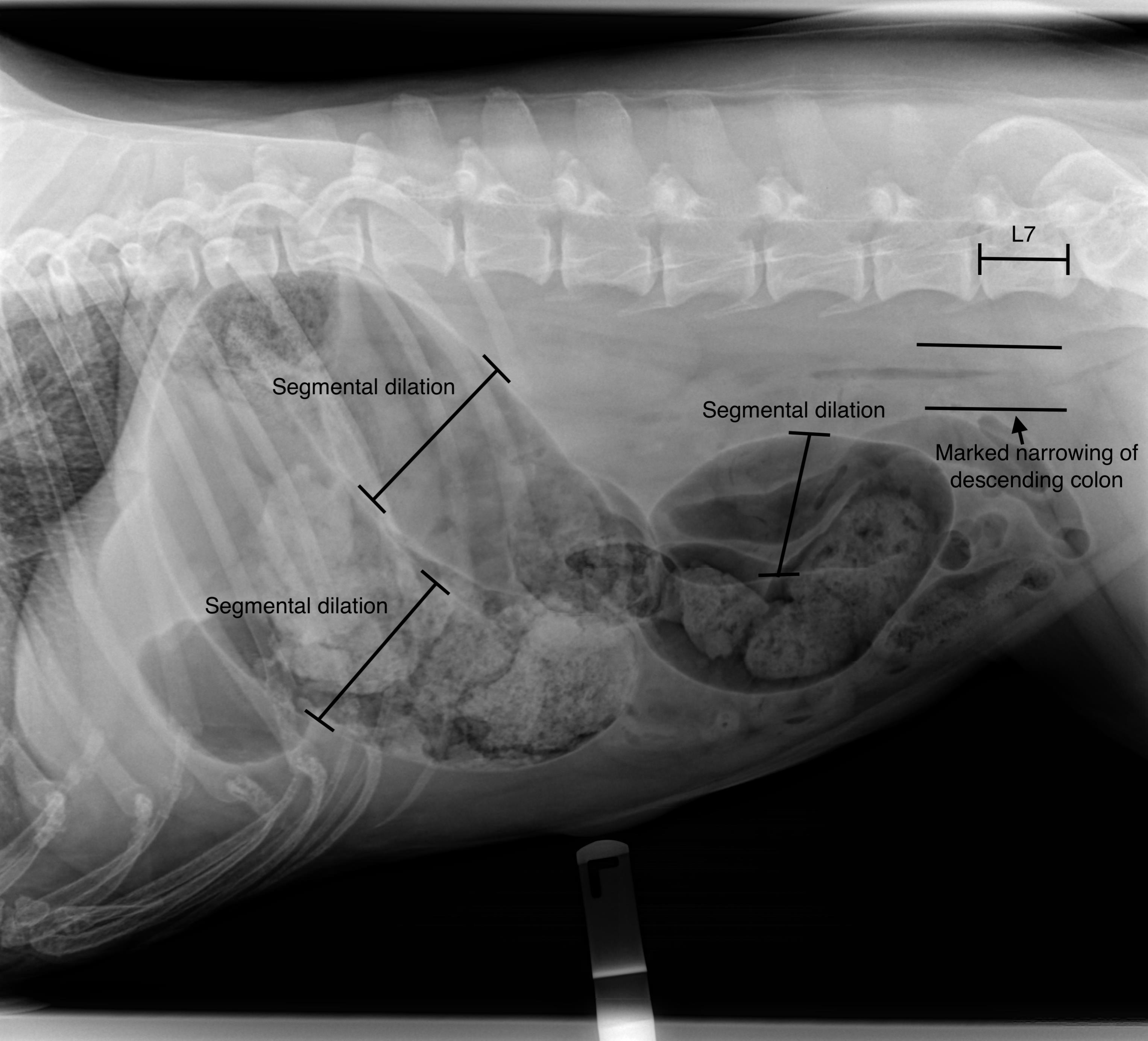